First, you should note that I’m not always dark; it’s based on the kinds of drafts that blow through the goddess’ castle. I could be BubblegumBetty next week..

I’m honored to become a resident here; I hope my stay brings much smiles, tears, introspection, and other states of cognitive and volitional states of consciousness.

I’m beating a blood-red gong today; it has a strong, powerful, compelling sound that communes with the spirit. Listen.. 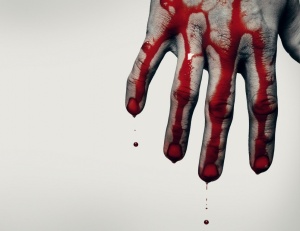 She evoked all sorts of emotions in him. Strong, potent emotions. It was why he’d married her. No woman had enveloped him in such a fervid manner. He’d wanted to possess her, body and soul. And it wasn’t just her beauty, he’d seen many beautiful women. She had fair skin with very black hair and dark, dark eyes.
And all that poise. He’d told his mother he’d never met such a lady. Her every deed was in a regal manner. Like some goddess come to inhabit a queen. Head held high on that long graceful neck. That neck he’d lately been having visions of snapping in two. She was so damn cold. She hardly ever reacted to anything these days.. Those eyes just glazed over him like she expected nothing less from an earthling such as him.
When he’d run into the arms of his voluptuous secretary; he’d been deliberately sloppy so she’d find out. So she’d be hurt. So she’d cry. But all she’d said was “I forgive you..”
He didn’t need her bloody forgiveness. He wanted a tantrum, anger, tears. But she’d just sat there and said it, not even looking at him.
He’d looked at her. Envy and hatred eating at him. In their five years of marriage, she hadn’t lost her figure. He, on the other hand was now the proud owner of a pot belly as his hair line receded. She couldn’t have kids, an operation gone wrong, she’d told him on their second date. So he’d had no illusions.
An overwhelming urge to possess her came over him and he walked over to his fair wife who sat so calmly, flipping through the latest edition of Reader’s Digest.
He leaned down and touched her face. He loved her, he did. He reached down to kiss her, his intentions very clear. But at the last minute, she turned her face so his lips met cold cheek, not warm lips.
She went back to her publication. Then said, “Don’t. Ever. Touch. Me. Again.”
Furious now, not thinking. He slapped her hard on the cheek he’d only just kissed. The fair cheek reddened fast. A flaw on the porcelain face.
But she didn’t cower. Didn’t flinch. Didn’t run for cover or even reach up to protect herself. Her eyes just flashed as she stared straight ahead, her eyebrows lifted slightly as if in amused interest.
He cursed and walked over to his bar; throwing the strong liquid down his throat. Then he threw the whole decanter against the wall; angry he had to seek boldness to take his wife.
He walked back, his own eyes now red. Met her in the same position. Pushed her to the ground roughly, pushing her skirt up tearing her panties away as he resorted to take her by force.
Still, she said nothing; just closed her eyes as if resigned to the worst. A blind rage engulfed him and he lashed out angrily. Over and over again, he hit her. Angry that she wouldn’t defend herself, angry she had reduced him to some animal with primitive emotions.
And he hit and hit.
And when it was over, he looked down at his bloody lifeless doll; gathered the shattered pieces of his ice sculpture into his arms and wept.
You might also like
*Blind Faith
*I could use another husband
*Love and truth
Advertisement