Gather around all.. Don’t leave your backbones behind. For in the pitch-black night, the spirits inhabit the stories, making them much more.
Spooks and poltergeists, pulsing lights and distant screams, visions and dreams, transporting you to the wilderness of the unseen

Listen.. For the phantoms call. Listen. 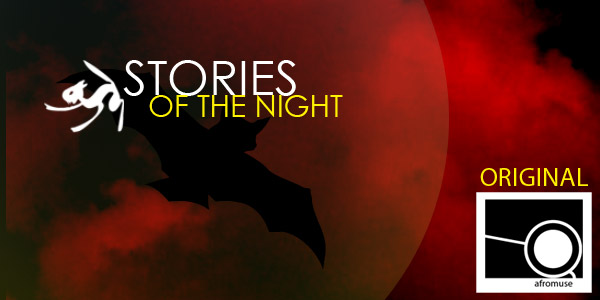 She hid her eyes.
He was searching for them, through the errant strands of hair that covered the side of her oval face and left him a slice, just a peek of beautiful; through the huge darkly obstruction that rested on the tip of her small nose, that only offered him a top view of her painted eyes; all he saw was aquamarine and long lashes. He had to see her eyes.
Her lips reminded him of sweet sin as he stared. Her cheekbones high, lending an ostentation to her face. Her chin, very much kissable, led an adventurer’s trail down to a neck unadorned, deserving of the adornment of only the purest kiss. Not his. Her long hair was hers, he knew, she was all the beauty that she was.
But was she the one?
Her perfume found him and then convinced him to worship her. His eyes took the pilgrimage down from her neck to her brittle neckbones. Sigh. To her milky skin in exhibition, covered by a free dress with its flowery straps loose on her arms. There was an alley just below her neck, and the drops of amber light that licked the side of her face fell there and perished. Holy martyrs of night. He wanted so badly to explore that hidden cavern, and know its treacherous secrets, his pilgrimage was not done. At the cliff of her dress, rose and fell every second, the prides of her womanness. Fast.
She was afraid.
Was she the one?
He felt himself thump against her car as he leaned in for a better view. His colleagues were attending to other cars, the usual motions of a police checkpoint.
His flashlight beamed a dull glow against the insides of the car but he really wasn’t paying attention. He was finding it hard to tear his eyes away from the soft shadows at the top of dress, to breathe.
“Madame, inner light”, he managed.
The fact that she wearing sunshades at this time of the night wasn’t altogether odd. He usually told the partygoers to take it off. He decided to tell her after she put on the light.
A hand went up to oblige his request but he didn’t care, all he cared about was the dress that slipped further down and the beauty that was exposed. Her perfume rose up with a stronger resolve and numbed his senses.
A stronger spray of yellow hit the cabin, stunning the police officer for a few seconds. It was all the time she needed. Her second hand left the steering wheel quickly found the gun under her seat.
He just stared and grew harder against the car. Lust was pouring from his ears. Her heart was beating faster. The temptation was killing him. He grew bolder. He had to see all of her. Everything!
“Madame, please take off your glasses”
She turned off the safety.
“Madame, please come down and open ya boot”
She sped off into the night, steering a wild dance to the music of gunshots. Murder was the chorus.

She walked slowly down the street; streetlights distorting shadows on the wet pavement, crickets called out to her, from the echoing silence. The chilly weather threatened more rain, but she didn’t feel it. Her flimsy dress invited shivers but she moved toward her destination, stoic.
The blindfold was too tight. She shivered. She could hear whispers and shuffling of feet. She didn’t know where she was or why she was there. The darkness heightened her senses and raw fear trickled down her spine.
“Do not fear us, child.” She jumped.
She knew they’d been there but the elderly voice that reached out to her brought to memory the ghastly stories of ghosts she’d heard as a child. It was spidery, broken and soft, reminiscent of evil itself.
She got to her destination. The sounds of night soothing her. They were all asleep. The back door was open. She let herself in quietly and stealthily moved into the house. Excruciating pain lanced through her head, threatening to squeeze the life out of her. She wanted to scream out but she bit down on her tongue. She bore the pain.
He was still talking but for some reason she couldn’t hear him any more. Her strength was being sapped out of her and she had no power against it. She felt rather than saw the shadows draw closer and caress her. He was still talking. She could hear the sound of his evil voice but it was indistinct.
Her hands fell to her sides, slack. The shadows had overwhelmed her. They were pressing into her, sucking her into the vortex. She succumbed what was left of her will.
She had stopped the pain. She bent over and let out long breaths.
The scream was long and drawn out. Blood-curdling.
“Eeeeekkkkaaaaeeeeeeetttttteeeee!”
Ekaette woke up with a start. “Ma?”
The unbidden response leaving her lips even before gaining full consciousness. She opened her eyes. She was in Junior’s room. Junior was covered with blood. Her very own hands were covered with blood. There was a bloodied knife on the floor. The splatters of blood had formed an eccentric pattern on every surface. She looked confused.
Her madam was cradling her son in her arms. Strange sounds emitting from her throat. She rocked the child from left to right, her glazed eyes staring in Ekaette’s general direction.
“Ekaette… Ekaette. why did you kill my son?” She whispered hoarsely. “Why?”
“I.. I.. I didn’t.”
Ekaette was transfixed, confused. The last thing she remembered was going out back to empty the dustbin.
What had she done?
You most definitely would like
*Midnight noises
*The Passenger
*Dancing in the dark

33 Responses to “Stories of night”