Gather round! Gather round! Dear @NateOblivion sings a dark tale tonight, the burden of the gong is his to bear. Come all. He speaks:

I, Nate Oblivion, beat the gong in the dark of night, here at the border of Insanity and Genius, to resound through your heart and soul, to awaken your nightmares and chill your bones. Listen.

DEATH AND ALL HIS FRIENDS 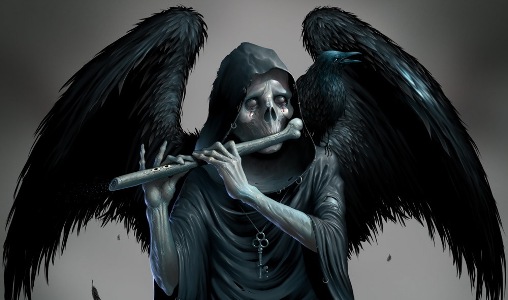 There was complete silence in the cinema hall, the light from the giant screen providing the only illumination. The air was tense, and the crowd held their breaths. The movie had reached its anticipated climax. After watching various characters suffer the most gruesome and unimaginable deaths, only the two lead characters remained. She was clinging to his arm and squeezing it tight, and his body resonated with the vibrations from hers. She gazed at him, and spoke in a barely audible voice.
“Aren’t you scared at all?”
He looked at her and smiled. “It’s just a movie darling, with actors and scripts. There’s a director behind that set who would laugh buckets at your reactions”
She said nothing, and turned her attention back to the movie. The male lead was standing in the middle of a wide road, looking around for something in panic. All of a sudden, an electric line overhead snapped and swung towards the man, throwing him backwards a few meters. He was broken and bruised, but still alive. The ground started to vibrate, and he sat up with great effort. He looked to his left just in time to see the vehicle, which trampled him and sent blood flying.
The audience screamed and a few people started to leave, obviously too terrified to watch any more. She remained in her seat, but was shaking feverishly and muttering to herself. Her boyfriend pulled her closer to himself and put his arm around her.
“It’s okay” he said. “It’ll soon be over. Or do you want us to leave now?” She shook her head defiantly and faced the screen. The female lead was standing on the sidewalk, about to cross a busy road. She looked left and right, making sure the road was clear. She had only taken a step forward before she trod into a crack in the road, and the stiletto of her shoe twisted and broke. She lost her footing and was already wobbling when she heard a loud horn and turned to the right to see a bus heading for her at break neck speed. She fell backwards, and the bus flew past in a gust of wind. She was trembling as she stood up, dusted herself off and crossed the street, entering into a tall building. She opened the door to her apartment and entered, tossing her ruined shoes in a corner. She entered her bedroom and sat on the bed. She fanned herself with her hands and took off her jacket. She heard a loud creaking sound and looked up to see that the fan was swinging wildly and almost loose from the ceiling. Before she could scream, the fan came loose and landed on her with tremendous force, the squelching sound resounding throughout the cinema. The blood splattered across the screen and spelled out the title of the movie, “DEATH AND ALL HIS FRIENDS” The screen went black and the end credits started rolling. The crowd rose and left at once, as if in a hurry.
Outside the cinema, they stood hand in hand in the rain, while he tried to hail her a cab. Before long, a cab came along and she got in. they said their final goodbyes and shared a quick kiss before the cab sped off. He set off for his bus stop, kicking up muddy water from the puddles that had collected on the ground. He wiped his brow and increased his pace, almost running now. He entered a side street, taking a shortcut he rarely used so he could arrive faster and find shelter from the heavy rain. As he walked, he heard a loud snap and spun around to see a live wire crash into his chest. The pain numbed him and the shock sent him flying backwards, landing with a thud in the middle of the road. He had barely registered what just happened when he heard a car horn and saw a bright light drawing closer. He turned his head towards it, and the last he saw was the big wheels of a truck before it ran him over, crushing him to bits and leaving behind nothing but brains, guts and blood.
She alighted the cab and stood on the sidewalk. She was still a bit shaken by the horror movie, but the fear was had begun to wear off. Her mind replaying scenes of horror and gore, she began to cross the road, when the sound of a horn jarred her from her thoughts. Purely on instinct, she jumped backwards and fell to the sidewalk. A large bus flew past at breakneck speed and the pedestrians were already shooting her disapproving looks while an old woman started to rant about how people never paid attention the road. She shrugged it off, crossed the street and entered her apartment, turning on the lights and finding no one around. She sat on her bed and removed her shoes. For some reason, the room was sweltering hot, even though the ceiling fan was on. It was old and had recently become squeaky, but she would get it fixed tomorrow. She fanned herself with a card and looked around. Was it just her or was the fan’s squeaking louder than usual? And why did it all seem so familiar? Her eyes widened as she realized why, and her breath got caught in her throat.
She looked up.
@NateOblivion shares his art as a member of the very excitingly paranormal circle, the Pass The Salt band, here
NEXT WEEK, WATCH OUT FOR THE AFROSAYS PROJECT, GREEN NATION BY @HL_BLUE
“The trees went forth on a time to anoint a king over them; and they said unto the olive-tree, Reign thou over us. But the olive-tree said unto them, Should I leave my fatness, wherewith by me they honor God and man, and go to wave to and fro over the trees?” (Biblical quote)

17 Responses to “Death and all his friends”