The gong is bedazzled; blinking white crystals like a disco ball. Outfitted with an exuberant surround-sound system because AfroSays: 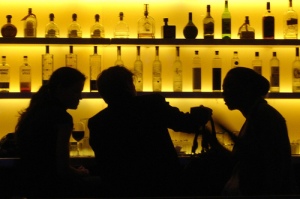 I held her hand and pulled her close to me. She didn’t tense up or act shy, she just went along with whatever I was gaming at.
I whispered in her ear softly, “How naughty are you?” She didn’t answer, she just smiled. Confidence.
I’ve always had mixed feelings about confident ladies. Sometimes, confidence is a sign that we both want the same thing and she’s mature enough to skip past the verbal foreplay but sometimes it is an indication of a kind of feminine ego, a superior complex that controls and exploits. I find such leanings repulsive, even in men.
But her smile wasn’t that of a man user, it was more hubris; a female cocky, with an edge of perky to it. Obviously, she thought herself exciting and she delighted in that thought. I smiled too.
“How much of a man are you?”
As I opened my mouth to discharge a slew of macho nonsenses, she put the tip of one of her lacquered talons on my lips and said, “Show me!”
She laughed as I fumbled for my car keys in a clumsy flurry of hands like a kid who’d been caught touching himself. Her cold palms touched my hands, calming them.
“Not yet. Not just yet dear!”
Before I could conjure up a lucid thought, she dragged me to the bar and pulled out a stool for me.
“I win, you pay” She winked.
“Gordon, fourteen shots of tequila” she said to the tender.
Gordon must have known something I didn’t because he laughed as he slid shot glasses across to us in pairs, one after the other with all the charisma of a Texan gunslinger. As if by magic, suddenly, there was extra salt and lemon cutlets in two small trays on the table.
She had already emptied her first shot when the second pair arrived. She slid the first glass across to Gordon and threw back the second as the third glass arrived, meanwhile, I was collecting shots like a target practice dummy.
As she lifted the third glass, she stopped and looked at me. She shook her head with a smile.
“You don’t drink much do you?”
“I do… I”
“The game is called Rum Roulette but I prefer it with Tequila. Down the first shot before the next one gets to you and slide the empty glass back. Fastest doer wins. Loser pays. Are you sure you drink a lot? We don’t want you getting wasted after…”
“I drink copiously, COPIOUSLY!” I said with a mock northern accent, trying to relay my expertise with percentages in good spirits.
“But I’ve got three on you though. You’re gonna pay for them and we’d start afresh. Seven shots in a row.”
I threw back the backlog of shots that had accumulated before me as she downed the third shot cheerily. The bite of the brew clung to my throat like an astrigent.
“Leggo!”
Gordon started firing shots at us again like a World War 2 Gatling machine.
Slide.
Quaff.
Bam.
Slide. Sliide.
I threw the shots back ignoring the sharp sting of the stuff, one after the other, keeping count. I could hear her glasses hitting deck before mine in steady bam-bams like the bass of a marching band. I could barely keep up.
When she threw back her final shot, I still had two coming for me. I managed to gulp one down.
I knew I was in trouble when I put the sixth glass down and turned to look at her. Her face was blurred like a soft-touch picture. I could hear people cheering at the background.
“B-Baby! B-Baby! B-Baby!”
In slow motion, I saw her open her mouth in shock and stretch her arms as the distance between us widened.
BAM!
Last shot in hand, I hit the floor.
The next morning, I woke up in my boxer shorts, on a very comfortable strange bed. The modest bedding bore conspicuous Vine&Charlie Lodging prints asserting that I was a guest of the bar.
A small piece of paper was right next to me. It was a receipt.
“20 shots of Tequila – N13,400”
It was autographed by the Rum Roulette champion of Vine&Charlie, Boyowa, and my wallet confirmed the veracity of the payment.
Just before noon, as I checked out at the reception, I was told that Boyowa had paid for my stay. There was a stupid smile on my face. I knew where I had to be that night.
I had to see her again.
You might also like
*Rapping for dummies
*The curse of the beautiful
*Navigating Dark Alley