My gong is one of oddities and whys. Of choices and their waves.
Listen. 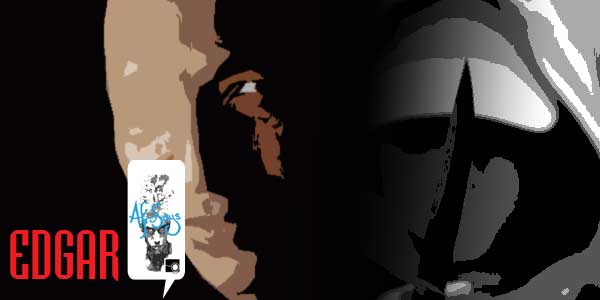 There was a lone light bulb dangling from the ceiling above the two occupants of the room. It was the way Mr. Edgar liked it, he got what he wanted because he hadn’t failed anyone yet. He was a man of odd proportions- his short torso and long long legs always attracted stares whenever he ventured outside, which wasn’t often. The twitch in his left eye was a subject of pity on the streets; but within these walls, it was an all-seeing twitch.

The other member of this meeting stared at the twitching eye and shivered. The fear and confusion emanating from this eleven-year old hung over the room like a palpable fog. His fingers gripped the seat of his hard-backed chair and his lower lip trembled.

Mr. Edgar crossed his right leg over his left knee, the tip of his shiny shoe catching the light.

The boy began to cry while Mr. Edgar looked on in silence.

“I didn’t! I swear I didn’t!” Kingsley’s voice squeaked. He raised an arm to wipe his eyes but the tears were readily replaced.

“So, how do you explain it? They found the knife in your hands, Kingsley…” Mr. Edgar uncrossed his legs and leaned forward. There was nothing seperating the two males. “You were standing over him.. Kingsssley..” He drew out the ‘s’ in his deep voice- the only enviable feature he had.

Mr. Edgar leaned back again and allowed the sound of Kingsley’s tears fill the room for a minute. He spoke again- “They’ll take you to a bad place, Kingsley. Do you want to go to this very bad place?”

Kingsley shook his head hard but said nothing.

“Send in the mother!” He spoke to someone on the other side of the door. He gestured for Kingsley to leave and returned to his chair.

A skinny woman with red puffy eyes walked in and replaced her son on the chair. Her hair was tied back with a floral scarf but the black long dress she wore made her look gaunt. Mr. Edgar surveyed all these silently for a while before she shifted in her seat uncomfortably.

“Yes?” She looked up at his twitching eye then looked away. Then she looked right back, as if realizing her previous action was rude.

Mr. Edgar’s lips turned up in a mirthless smile but that disappeared soon after. “Tell me what happened,” he commanded.

Her bony fingers latched on to each other, like one would do when pleading or praying. Her eyes watered but she blinked them away and stiffened her back.

“I came back from church around eight-thirty..” She pursed her lips then looked up to the light bulb before going on. “I..I saw Richard lying on the couch and..and there was blood.” She lowered her head. “And his brother..Kingsley..was standing there with a knife in his hand and there was blood.. Everywhere..”

She broke down then and cried silently. Her slight frame shuddering with the silent sobs. When she noticed Mr. Edgar had said nothing, she spoke again.

“Why? Why would Kingsley kill his brother? Richard was a good son! That Kingsley! I knew he was an evil child! The devil’s spawn! Always making trouble!”

She took in a deep breath and let it out slowly. “Well, yes. He used to make trouble. He was rude and lazy and was always getting into fights at school..” Her forehead furrowed in a frown. “But he got better after the accident. I think that scared him but he was so good afterward.” She let out a sigh. “Now this..”

Mr. Edgar leaned forward. “Tell me about that.”

She was suddenly tense and her eyes roamed the walls and floor and everywhere her eyes would go that wasn’t Mr. Edgar.

She glared down at her fingers and clenched them into her dress. “I was driving home from Ibadan. Ike’s sister lives there with her husband. Then I don’t know what happened but the car behind us rammed into us but reversed and sped away before I could recover from my shock.” She fell silent again.

“I parked so I could make sure the boys were okay and the damage was minimal but it was getting dark and.. Then some man who had been walking past stopped by my window ..with a gun, he had a gun.. And he asked us to get out. We did.” Mrs. Iwu looked up at the bulb then at Mr. Edgar’s twitching eye then back to her hands. “He grabbed my boys and..and pointed the gun to their heads. One after the other..” She began to cry again.

“Please go on, Mrs. Iwu. What happened next?”

“He..he.. Asked me to choose. Asked me to choose which son he could kill.” She whispered but her voice rose as she became more agitated. “And I begged him to kill me instead! But how was I sure he wouldn’t kill them after me? And..and he said I must choose or we three would die and I..I..”

“You chose Kingsley, didn’t you?”

Mrs. Iwu’s crying intensified and her “Yes” was almost drowned in the midst of it.

“He then pushed them both before me and he laughed and laughed and..and he walked away. And I tried to make Kingsley believe it was a whole ruse to make him behave but he started having all those dreams..” Her words were pouring forth in a jumble and Mr. Edgar leaned forward to catch every one. “But he became good. Kingsley became good. Until he killed his brother!”

Her eyes widened suddenly and her neck snapped up as she stared at Mr. Edgar with panicked eyes. “Could that.. Is that why?”

Mr. Edgar showed off his mirthless smile again and said- “We’ll see.” He rose to the door again and asked for Kingsley to come in.

He told the frightened boy to sit in his chair while he walked a circle around mother and son.

“Kingsley, tell me about your dreams..”

Kingsley looked from his mother who wouldn’t look at him then back to Mr. Edgar. “It was the man from the road. The one that had a gun. I used to see him in my dreams and I told mummy but it was just because she wanted me to stop being naughty. And I had stopped, I started cleaning my bed and stopped fighting and..”

“The dreams, Kingsley. What happened in the dreams?” Mr. Edgar cut in.

“Oh. The man would just be laughing and I used to tell him to leave me alone. To leave us alone but then he would say he was part of me now and he would continue laughing..”

“Did you tell your mum?”

“I took him for deliverance!” She sounded angry. “Pastor. Mike prayed for him!”

Mr. Edgar paused and squated next to Kingsley. He took the boy’s right hand in both of his.

“What happened when Richard died, Kingsley?”

Mr. Edgar rubbed the hand between his. “Try to remember..”

Kingsley looked at the twitching eye again and looked at his mother’s bent head. “Me and Richard were sleeping in the parlour, waiting for mummy. Then.. I had a dream again. The man came again but he was not laughing this time. He was angry. He said..”

“He said he was going to punish mummy for picking me. Then I woke up and I was standing in front of Richard and there was blood and mummy was screaming and…” Kingsley began to cry again. Loud harsh tears that reverberated in the small room.

Mr. Edgar stood straight and tapped Kingsley soothingly on the back. “Thanks boy,” he said and walked out of the room.