The seasons come and go and leave remnants of us.
AfroSays, 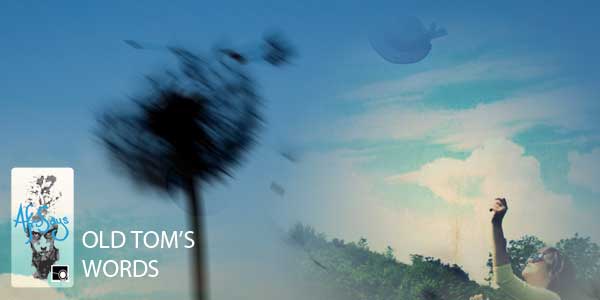 I never took the walk back home alone.

Even from the first day I started mixing drinks at Tom’s, he would leave the night’s accounting to escort me.

Actually, it wasn’t inconvenient for him because I stayed only two short streets away from the bar; I guess that it really was therapeutic, for good old Tom never said much as we dragged our tired feet along – mine tired from tending his garden of bottles for the quarter of a day and his from welcoming all comers with a handshake and a fatherly inquiry into their affairs. Tom genuinely cared about us all. It seemed that this nightly walk of ours was a form of catharsis for him because he always kept the burdens of the small town on his mind. He’d walk by my side with his head bowed, and shoulders mellow, smiling and humming an old tune I would never recognize. The same tune every night.

We would avoid shallow puddles on those cold evenings and walk like father and daughter. Once or twice, he had told me about the wild days of his youth, how he met Janet, of whom he was widower-ed three years ago, how they had never had children, how life had passed so quickly. “Titi” he’d say, “It’s all gone too soon.” I would smile and squeeze his hand and he would laugh a weak one.

I only worked at Tom’s through the fall of 1996. I think I stopped mid winter because my degree eventually earned me a better paying job. most of that year remains a Gaussian blur to me but I’d never forget old Tom’s words.

I was twenty three years old, January the following year. I remember because that was the year I fell in love. The fall did not last too long and I landed on the cold hard floor; in my moments of bitter tears I remembered old Tom’s words.

Life skipped along and happy times found me and abandoned when I began to feel entitled. The pains of sorrow would eclipse the bright times and just when my breaking point was near, the sun would shine again. Friendships came and went just like love did, until I eventually found a lovely friendship. I am widowed of Joe now, a heart condition tore him away from my hold. Too soon.

My parents decided to get a divorce last year because they both decided that it would be more peaceful to die alone; they both still hope that I’d take a side. I’m too old to care.

I had my life planned in the beginning and I haven’t done bad for myself. I am not where I planned but I am in a beautiful place, beautiful because I choose to see all the good things around me. Although, I can afford a lot of the simple things I want but I don’t enjoy them as much as I thought I would, except maybe when it’s a new experience like my first full body massage at the inexplicably expensive Shirley Buddha.

I’m turning forty soon and I still have half a full life to live and to enjoy as much as I can. Sometimes I think back to those walks with old Tom and his hollow laugh brings a smile to my face. He darn sure was right, it’s all gone too soon.

So why not enjoy it while it lasts?

Let us warm our legs by the fire and listen to the warm voice of a friend. A worthy friend – @JadenTM – writer of The Third Decade from the Decades II project.

The deep bass of afro’s gong and betty’s beats ring out before me.

I drum and I drum and I try to match the sounds I hear, but all that comes out is a
hollow throb that I have filled with words. Listen…

When I close my eyes I am alone. I cannot see the long strands of wispy yellow (or
brown, or red) hair blowing about in the breeze, and I cannot feel the sharp sting of the
insolent wind against my blue, stiff, brown hands. I cannot hear anyone; there is no
need to filter sounds through my mind before regurgitating words in similar taste: there
is nothing outside of the skin in front of my eyes, and I can breathe.
I can breathe in the texture of the quilt that covers me, the fresh paint from the newly
re-painted bathroom ceiling; but beyond the added scent of olive oil and lavender
wafting up from my bedside table there is also the permanent smell of alone.
My dreams paint pictures of eba and efo riro, flashes of people who are my friends,
except their faces fade and their names don’t match. My dad is smiling at me, but when
I smile back it’s not him I see, and when I look again there’s nobody there.
It’s dark as night when I open my eyes but on the clock it’s just six, and all I want is
stew.
There is no pepper. They have learnt how to take out the lactose from the milk from the
breast of a cow, but not how to make pepper – the real stuff, ata rodo style. Or am I
looking in the wrong aisle?
And here, I learn it is once again acceptable to call chips chips. Humph.
I wrap myself in swathes of clothing and take three deep breaths before stepping
outside, and then I get to class to find that everybody is wearing shorts. It seems they
turn red and green and white, but not blue. I keep my coat on.
My fingers turn red when I get back to my room, my cave.
Pictures of my friends are pinned to the wall. They are stiff and frozen, like the smile I
wear when I ask for directions. My bed sheet from home is on my bed. From home!
I tweet, ‘a slice of home, yay!’ but it is too big. It doesn’t fit.
My feet are cold now. They say the heat is automatic, but twenty-one degrees cannot
thaw my toes, and so I burrow into my bed and close my eyes.
There are no tears, I am not sad, I do not feel. I am only tired from walking everywhere,
and I am glad to be alone, again.
@JadenTM the Super Sexy Secret Assassin Robot would share her art with us on AfroSays from time to time

Hello all. I know it’s been a while. I have no half-hearted apologies to render, it was for the good of all. This here is a story I’m working on. Working on, because I’d like to develop it. This is a draft I enjoyed writing. I hope you enjoy reading too.

The gong I beat is mellow. Faint and nostalgic. Dreamy. Listen for the underlying strings, the strums of the return. Listen.

My love for walks started with my father.

When we still had money, I loved riding with him to buy petrol for the generator. We would sit there, not speaking, listening to all my favorite people on the radio. At the filling station, he would give me the money and ask me to get the keg out to be filled- I liked the sense of responsibility. But the walks. I loved them more. The walks started when the money went. We would take the short walk out of our small estate to the Malaam to buy candles because petrol became too expensive.

But because there was no radio noise to fill the quiet, we spoke instead. We had long conversations of what I wanted to be; what he wanted to accomplish and what he wanted for us- each child. We would walk so slowly, walking past the bigger houses that were lit up with a thousand lights because they had money to buy petrol for their generators. Past the smaller houses like ours, some bright, some dark. Walked slowly as fast cars zoomed past and other pedestrians briskly overtook us. Till we stopped in front of our faded red gate.

Father always looked a bit sad when we got back home. I didn’t figure out why until recently. I think Father got sad when we got back because it was a rude jolt back to reality. See, Father was a dreamer, he had these big aspirations for himself and the family; he had all these plans laid out and he spoke about them with such zeal, each time. But getting home was like a douse of cold water at three in the morning because the dreams were just that- dreams. Nothing was happening. His projects were still failing. We were still being called out at school because the fees hadn’t been paid. We were still eating meat only at night. We were still buying candles.

So, whenever we stopped at that faded red gate, those palaces we had built with our words quickly faded into nothingness. But Father was such a sport; he’d bound into the house with jokes for mother and sweets for the little ones. We found other reasons to go on walks. Just him and I. And then, we stopped walking for reasons at all. We just did.

I paint now. I was a sculptor a few months back. I was writing for a magazine last year and I was a freelance photographer before that. A boyfriend once told me I was a lot more like my father than I thought. Picking a project and then abandoning it in pursuit of another dream. We fought that day. Not because he was wrong, not because I did not agree with him; but because it had never been put to me that way. I fought against it. So cold but so true. Abandoning one to chase another.

My younger siblings are grown now, working in banks and owning schools while I paint and write and play my guitar and take long walks. But I find that my walks do not end when I arrive at my tiny, cluttered studio apartment; it doesn’t end when I see my battered wooden door, I go on dreaming. I have translated it to what I call my art. I sing my dreams, I write them, I draw them. My life feels like a leisurely haze of pastel colors. Surely, this isn’t a bad place to be.

None of Father’s dreams came true. I should probably say instead, none of Father’s dreams have come true because he hasn’t stopped dreaming. I visit him four times a month, every Sunday. My parents live now in the cute flat my sister bought them after her last promotion. We walk, even slower now that he’s supporting himself with a stick. We walk, past the houses that are all lit, because it is an upscale area. We walk as the faster cars cruise past. We walk on the lush lawns and neat pavements. We walk. We walk and dream.